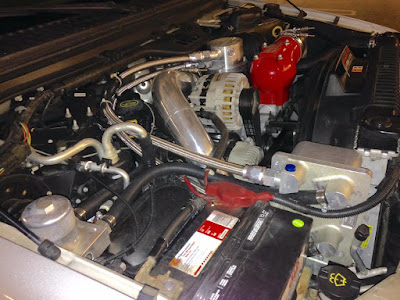 About a year ago, my 2007 F250 6.0 diesel was blowing coolant out of the coolant reservoir when I pushed the motor towing my travel trailer. All indications suggested a blown head gasket, or worse cracked head. Up until this time (110,000 miles) I had had relatively few issues, even though I had kept a close eye on the truck, hearing of the numerous concerns of this particular motor. Despite the bad rep this motor has received, I had also heard that if you took care of a few things, the motor was solid and worth investing in. So I had a choice of investing in the current truck or buying a new one.

With the costs of the new comparable trucks, the amount of money I would need to put down on one, and the monthly payment I was looking at, my wallet cringed at the thought of nearly $1,000 a month payments. So I looked into what all I would need to make my 6.0 a solid truck that could take a 10,000 load often.


My motorcycle mechanic referred me to a diesel mechanic, who in turned me on to Innovative Performance Research (IPR) and suggested that I consider some of their options, in lieu of others I was looking to install and had found out about through Diesel Power Magazine and Xtreme Diesel. What I found was very interesting and after further research, I decided to install a number of IPR’s products.

First, I knew that if I was going to have to replace the head gasket, and possibly replace or rebuild the heads, the top end of the motor would need to come apart, exposing some of the known problem components of the 6.0. My primary concern was the EGR and the oil cooler. The factory had already replaced the EGR valve and cooler while it was still under warranty & I knew, given the miles I had on the truck, I was pushing my luck with the oil cooler. I also knew the head studs were an issue and ARP head studs were a must, especiallyif you pushed this motor (which I do). 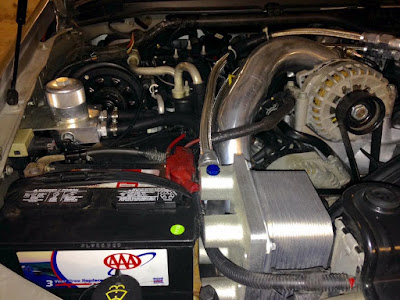 If I was going to take it that far, I really should replace the oil cooler as it was only a matter of time and I would have to pay to have someone take the whole top end off again to do so. I looked into other aftermarket oil coolers, with different configurations but IPR’s sold me as it remained a water cooled solution but took the cooler out of the middle of the block (hottest place on earth) and moved it to a frontal location where it had an opportunity to get away from the heat while making it more accessible for future service. Other designs located the cooler in locations susceptible to damage if you took the truck off road, were air cooled (not great for cold weather), or had hoses running in (what i consider to be) non ideal locations. I had also previously installed an after-market coolant filter system but, once I saw IPR’s (in line) coolant system and compared to my bypass coolant system, I knew the chances of particles building up in the oil cooler would be at less of a risk if all of the coolant was filtered.


When it was all said and done, the investment was pretty significant; however, the truck would only have needed to last another 6-7 months to offset a new truck payment and get my money's worth.

After this purchase, IPR recommended a monitor to replace my OEM gauges and more accurately monitor some of the critical operating parameters on the truck (i.e. exhaust gas temperature, oil temp, coolant temp, etc.). I bought a monitor programmer with those capabilities and installed the EGT probe. A year later, I tow my 10k travel trailer quite often up and down a 7% incline. My alarm limits on the monitor are relatively conservative so I can either choose to push the truck or not all while monitoring the critical gauges closely. 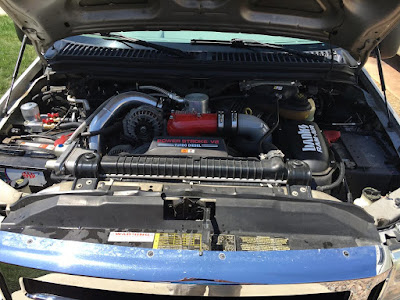 Quite honestly, I don’t know how I didn’t blow this truck up sooner, being as blind as I was to how important these settings were. The truck continues to perform extremely well and I am extremely happy with the purchase. For those of you that have had similar problems, are looking to get a 6.0 diesel, or are wanting to prevent the inevitable from happening, I would highly recommend considering some, if not all of the IPR options I installed in my truck.

Finally, I want to thank Vince for being there when I had questions and providing the fantastic support. His feedback was instrumental in my success.

Email ThisBlogThis!Share to TwitterShare to FacebookShare to Pinterest
Labels: 6.0